Untapped Grilling and Other Addictions

As many of you know the genius behind all the wonderful Barbeyaki recipes and imaginative uses is Chef John Woods, owner of First

Choice Catering.  John has been a friend and a mentor to Barbeyaki for some time now.

Well he just blew all of his past creations out of  the water with his latest. 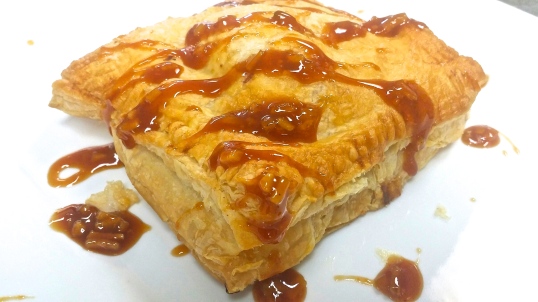 What you all need to know also is that Chef John loves to tell stories. So here is the Story of the Barbeyaki Beef Wellington.

One afternoon a long-time client called and asked me to prepare Beef Wellington for a luncheon they were having for several very distinguished visitors. Beef Wellington is a famous dish that was named after Arthur Wellesley who became for first Duke of Wellington after defeating Napoleon at the Battle of Waterloo in 1815. The Duke loved a tasteful dish that consisted of the choicest beef fillet, mushrooms, truffles and Madeira wine that had been cooked into a DUXELLES. Duxelles is something that every cook should add to their culinary repertoire. It is a mixture of finely chopped mushrooms, shallots and herbs that have been slowly cooked in butter and red wine until it forms a thick paste. Some people use only butter, but that is your preference. The beef is topped with the Duxelles, wrapped in puff pastry that has been gently brushed with an egg wash and baked. Wellington is usually accompanied by a complimentary sauce.The dish is not only elegant and tasteful, it is quite easy to prepare.

After coming off the heels of a great First Place win at the prestigious and very competitive Taste of Desoto with my Barbeyaki Beef Brisket Waffle Cone, the culinary creative juices were still working and I was still in “Barbeyaki mode.” I dashed from the kitchen, leaving my Executive Chef, Carol Singleton standing there in bewilderment and knee deep in production on the Wellingtons. A few minutes later I returned with a handful of miscellaneous ingredients that had no relationship to the menu or the task at hand. Totally oblivious to Chef Carol or any other activities in the kitchen I wrapped myself up in my own little world as I carefully cut peppers and onions along with thin strips of smoked Texas style beef brisket. Into a hot skillet went a little garlic and the julienne cut vegetable, which were sautéed until they took on a translucent appearance. It was now time to assemble the “mystery dish” as my staff continued to look on in disapproval of me abandoning my post.

Down on the cutting board went a sheet of puff pastry which was quickly topped with two tender pieces of sliced beef brisket, which was than topped with a layer of freshly sautéed peppers and onions. Reaching into my arsenal I pulled out my “Top Secret” Weapon, which a week earlier had catapulted me into the winners circle at the 10th Annual Taste of Desoto. When I was certain that no one was looking, I drizzled about a tablespoon of my favorite Barbeyaki sauce atop the brisket and vegetables and then garnished that with a sprinkle of shredded Smoked Gouda only to be topped by 2 more slices of brisket. Waiting for a moment when Chef Carol was distracted with her mere Beef Wellington preparation, I quickly snatched a tablespoon of her Duxelle and spread it atop the last layer of brisket. It was now time to wrap the concoction with another sheet of puff pastry. After sealing the edges of the pastry and applying a thin layer of egg wash, into the oven it went and I stood there, guarding my creation and eagerly awaiting the results.

I wish I had time to tell you how it turned out. Within minutes of removing my crowning culinary creation from the oven it was devoured by a pack of ravenous bystanders, leaving only a few flakes of pastry and a remnant of Barbeyaki sauce on the plate. My only thought was that if Daniel Boone would have had a Barbeyaki Beef Brisket Wellington at the Alamo, history may have been written a little differently. Maybe the Duke knew something old Daniel didn’t know.

Told you he likes to tell stories

Now for the Steps and Pics for us who need lots of help with Fancy Pants Cooking.

Step One: Sautee Julienne cut vegetables until translucent. Set aside in a small bowl and allow to cool.

Place two thinly sliced pieces of smoked brisket in the middle of a 5 inch square of puff pastry. 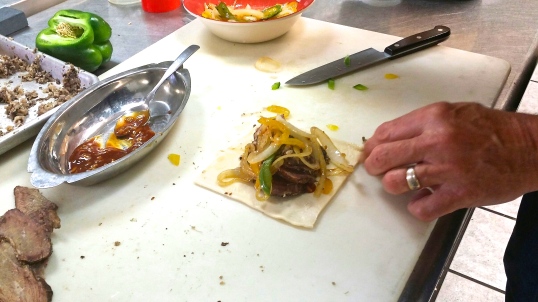 Drizzle the desired amount of your favorite Barbeyaki over slices of brisket and top with generous amount of sautéed vegetables and your cheese selection. 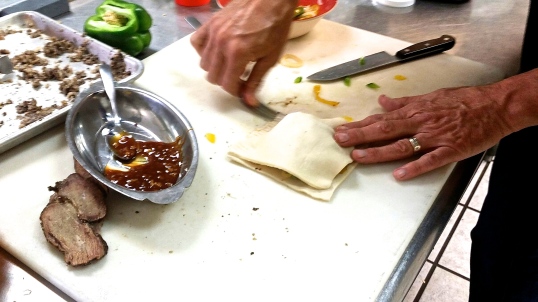 Top vegetables and cheese with too more slices of brisket. Top brisket with a tablespoon of Duxelle. 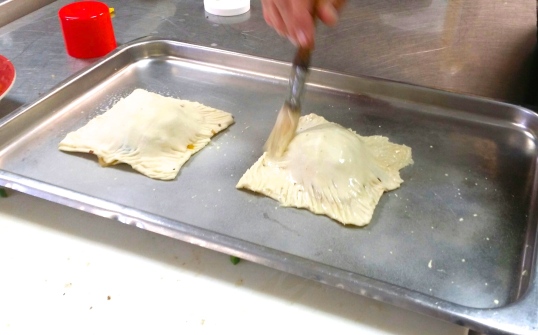 Put the Wellington on a lightly non-stick coated sheet pan. Brush the top completely with egg whites. Put a small slit in the top sheet of puff pastry so steam will escape. Place in a preheated 400 degree oven and bake until the crust becomes golden brown. Remove and allow to cool for about 4 minutes. Drizzle Barbeyaki over the top as a garnish and serve. 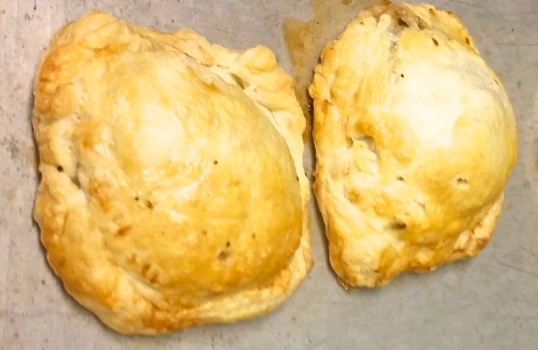 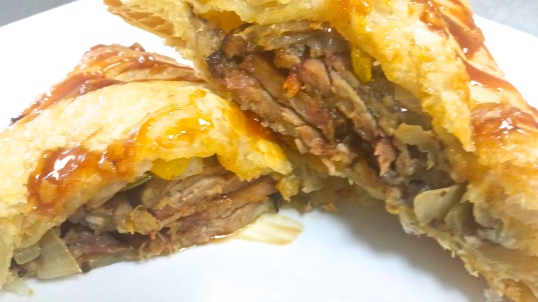 Now looky ‘der all you barbecue mavens. Let’s see you try this one out on your smoker! And thanks Chef John for sharing.

If you like this blog and would like to follow it each time a new entry comes out, just click on the Follow button at the bottom right of the page and enter your email address. It’s that easy! Thanks and tell a friend.